First thing to keep in mind is that the estimate given by the manufacturer for the gasoline run time can be used for propane also because it is just that; an estimate or guess. Propane only has about 10% less Btu content than gasoline gallon-to-gallon, so the estimate used by Yamaha for gasoline consumption will be very close for propane if not exact.  The biggest mistake most “experts” make in opinionating that a propane or natural gas generator will lose power is based solely on these figures and not on any data they personally have.  When figuring power output of any fuel, the size of the engine has to be a significant factor of the total equation.  For instance, comparing a vehicle with a V8 engine to a generator with an 11hp generator attached can not be calculated the same. The characteristics of the fuels and how they mix with air, how far the piston is in relation the gasoline float bowl effects the power derived from the fuel among many other things.  To presume that just  because the btu content is less, it is less powerful, is erroneous.

But for those that want even more information we now offer some basic factors, round numbers and some good estimates to see how run time values of propane cylinders can be worked out:

Cylinder Capacities in Gallons and BTU’s

Using these factors we can arrive at run times based on average load for any generator.

BTU consumption chart based on generator/engine size and load

For the physical properties of each cylinder, click on the “Cylinder Size” above.

What does all this mean?

Well, if you went exactly by the chart, you would need a 420# cylinder to run a 14hp engine if it was 25% full and 40 degrees outside and keep a minimum of 10 psi in the cylinder.  This is a worse case scenario.  For instance, when a 20# cylinder is full it can run a 16hp engine for quite some time in 40 degree weather before there will be any freezing problem. But if you wanted to use up all the gas in a cylinder, it would have to be sized according to the chart.

Here is why.   Propane is stored as a liquid under pressure and boils to produce a vapor that is drawn off at the top for the engine to use as the fuel.  Because propane boils at -44° (below zero), the gas will freeze if it can not absorb enough ambient heat to compensate for the boiling process.  The bigger the cylinder is compared to the amount of load, the warmer it is outside, the warmer the cylinder is kept, all are a determining factor in the likelihood of a cylinder freezing up.

If a sweat or frost line forms around the cylinder at the level of the fuel, this is a telltale sign that the cylinder over worked and is in the process of freeze up.  If the gas does freeze, it will stop producing vapor and the pressure inside the cylinder will drop to as low as zero psi which will cause the engine to stop running.

To compensate for an undersize cylinder, two cylinders can be tied together using a tee check and pigtails.  Some customers set the cylinder near the exhaust of the engine to help keep the cylinder warm and have no problem using smaller tanks on bigger engines. This practice needs to be carefully monitored so that the cylinder does not overheat and cause the relief valve to check off.

So if you are paying over $0.88 per gallon for gasoline, you can save by using natural gas. 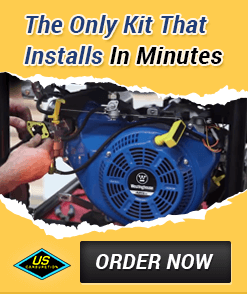 We have seen may attempts by those that see "fast money and easy pickings" by reselling product they have no idea how it functions. That is one of the factors that has kept US Carb number one all these years; we know our product, (our patents prove that!) we gladly help customers trouble shoot problems they may encounter, and we stand behind everything we sell because we know that a customer will benefit from our product.